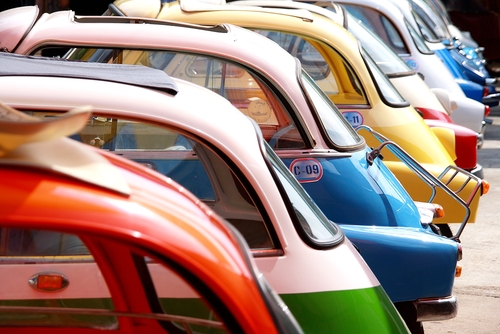 You may have read our blog recounting the history of the famous BMW roundel. There is, however, always more to a company than its logo. As experts on the work of such a time-tested brand, we’re always eager to dig into its past and find out more. Here’s how it all started.

For much of World War I, German mechanical engineer Karl Rapp operated Rapp Motorenwerke, one of the central military aircraft engine manufacturers in the German state of Bavaria. With the arrival of a new engineer named Max Friz, Rapp Motorenwerke designed the groundbreaking IVa engine that would radically change the shape and reputation of the company. Rapp resigned in 1916 and the manufacturer was eventually restructured and merged with two others to form Bayerische Motoren Werke (Bavarian Motor Works).

The end of World War I had a significant effect on the newly-formed BMW company. A clause in the Treaty of Versailles restricting German aircraft engineering meant that the design of other technologies was necessary. After further restructuring and a change of logo in the early ‘20s, BMW built its first complete vehicle: the R32 motorcycle, establishing the boxer-twin shaft-drive powertrain layout that BMW still uses today. In 1928, they produced their first automobile, the Dixi, and less than a decade later introduced the famous 328. This model redefined the sports car and made automotive history. BMW grew to become a global-scale company in the early ‘70s, founded its Research and Innovation Centre in 1990, and has remained at the forefront of vehicle design and engineering since.

With nearly a century of production to their name, the future of automotive design holds interesting prospects for BMW. Demand for electric mobility and other sustainable technologies is creating a complex new chapter in the company’s history. Focus these days is on increased efficiency and decreased carbon footprint in the product lifecycle, including recycled materials, lightweight construction, and the continued development of bivalent hydrogen/gasoline engines. From the innovative IVa aircraft engine to the hydrogen-based car of the future, things have certainly come a long way.

Whether it’s a simple repair or an impressive performance upgrade, we at MotorWerkes believe your BMW should be in the hands of a team that loves it as much as you do! To find out what we can do for your vehicle, feel free to get in touch with us at (403) 453-0269.