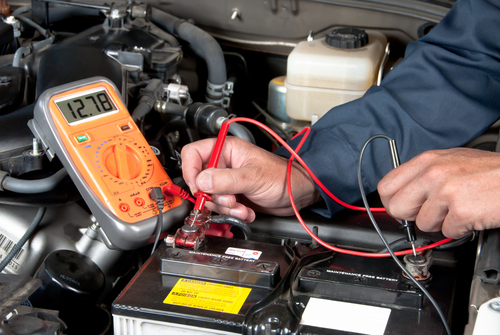 The battery is a component that your BMW depends on every day. We’ve written a lot about how important it is to take care of this powerful device, but it’s also helpful to know how it does its job!

There are a few things the battery takes care of, but its primary purpose is to provide the burst of electrical current that makes ignition possible. It could be said that around four to five hundred amps are needed for the typical car to get going, but the exact amount depends on a variety of factors. And starting isn’t the only duty that rests on the shoulders of the battery. It’s also responsible for providing power to electrical components in your vehicle when the engine isn’t running, a job otherwise reserved for the alternator. In addition to this, the battery acts as a voltage stabilizer, taming spikes of electrical current that are prone to come from the alternator from time to time.

How It All Happens

The average car battery utilizes lead and lead oxide plates immersed in an electrolyte solution of water and sulphuric acid. A twelve-volt battery will have six cells containing the plates and the solution, producing 2 volts per cell. By reacting with the solution, the lead oxide plates (positively charged) absorb electrons while the lead plates (negatively charged) emit them. Moving through each of the six cells, the electrons accumulate and exit at the positive terminus of the battery, making their way to the starter or other electrical components. When the battery has done its job and the car is running, the electrochemical process is reversed as it charges with electrons from the alternator.

You’re probably familiar with the mistake of leaving your headlights on, and we’ve also made the points of looking out for corrosion on the terminals and avoiding frequent short trips. However, there’s more to a battery than this. Your alternator and battery form a close relationship, so problems with one can be linked to or mistaken for problems with the other. Fortunately, low electrolyte solution levels, uneven concentration of acid within the solution (also called stratification), decaying plates, and other issues can all be diagnosed by a local technician. And such an important component deserves only the best treatment!

How long have you had your current battery? You can always have a load test and other diagnostics done by Calgary’s best certified BMW specialists. Get in touch with Motorwerkes at (403) 768-3163 today!